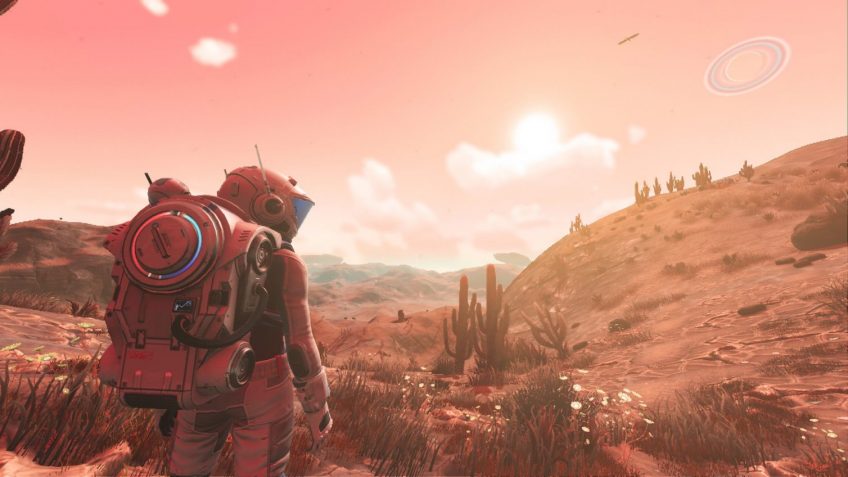 No man’s sky Beginning to beyond

I remember when I first heard about the game No Man’s Sky. In the summer of 2014 I was reading news of an indie gaming company called Hello Games creating a space exploration game with an endless universe that was full of procedurally-generated star systems, planets, and moons—each with unique life and materials to harvest. You’d be able to explore indefinitely, and even if you visited a planet per second, it would take multiple lifetimes to see everything. It promised to be the biggest sandbox game ever.

Unfortunately for me, it was a PlayStation exclusive and I was an Xbox console gamer. I wasn’t able to switch consoles or run out and buy a new PC over one game, it just wasn’t in my budget. I was so envious of my friends with PS4s, while we discussed all the announcements of what sounded like was going to be basically the perfect space exploration video game.

When No Man’s Sky came out on August 9, 2016, after dealing with delays to the initial release, it was not as well received as expected. It sounded like multi-player was a possibility, but do to the sheer size of the galaxy, the odds of ending up in the vicinity of another player (or even on the same planet) were astronomical. Players found being alone in the universe a disappointment, and the game still had a lot of bugs to iron out. For some, it didn’t quite live up to the hype. Others felt like the game wasn’t even close to what was advertised. Someone went as far as sending death threats to one of the developers over a lack of butterflies that had been seen in the trailers. Things got a little nasty.

The developers at Hello Games didn’t take the criticism lying down. They didn’t just give up and call the game a failure. They went back to work on the universe adding new mechanics and features over the course of several updates and patches. Things just kept improving. Hello Games made No Man’s Sky into an awesome space adventure, where people have now logged hundreds of hours of exploration.

And now, five years later, the most recent update No Man’s Sky: Beyond, brings support for virtual reality, new multi-player mechanics, overhauled base-crafting, and a space anomaly with missions that lead you to useful resources like ships & freighters right from the get-go.

Check out the complete Release log from Hello Games.

No Man’s Sky Goes Beyond Reality

It’s been 3 weeks since Hello Games released the latest major update: Beyond, on August 14, which brought virtual reality support and quite a few new and interesting mechanics to the game.

I bought the game, put on my Oculus Rift, and got lost in the Galaxy. Checking the stats on Steam revealed that I was going at this game like it was a part time job, clocking in over 20 hours in the first week. (To be fair I spent a lot of time the first day just figuring out controls, reading everything in the guide, taking, breaks and trying to get around Steam VR crashing).

With planetary EVA’s and full VR touch controller support, this game is what I wished Elite Dangerous would have been when it got VR support.  E.D. is a flight sim that players recommend using extra hardware like HOTAS (Hands On Throttle-And-Stick) to play, where all the action is confined to the cockpit of a craft. E.D.’s docking procedure is kind of complicated and landing in space-stations requires manual manipulation that can be pretty finicky when trying to play using touch controls or even an Xbox controller. No Man’s Sky, on the other hand, lets you hop in the cockpit whenever you want and grab the virtual throttle and flight stick and away you go.

This is one of my favorite things to do in the game. It’s basically like super space-minecraft. After you learn a bunch of blueprints, and gather the required materials, you can make some amazing stuff.  Most of my architecture so far features glass cuboid rooms and walkways and glass paneled cylinders with amazing views. You can tunnel into mountains and build, and I’ve seen tree houses built by other users that are just incredible.

Bugs in No Man’s Sky VR, and Pancake mode

Build a portable save point and remember to use it often, because there are a few bugs in the game that will make you wish you had. Most of the bugs I’ve encountered I was able to work around with restoring manual saves and a few minutes of pancake playing.

Pancake gaming refers to playing games on a monitor or screen. After VR, desktop games are flat. To play a game in pancake mode is just to play it in the old way, with mice and keyboards and a 2 dimensional view. If you want to switch to pancake mode in Steam, just close Steam VR before you launch the game on your desktop.

Spacedeath— Sometimes when you attempt to remove a room from the freighter it’ll take you out with it. When the ground disappears from under you, and your life-support system fails, right before you die in the cold vacuum of space, you’re hit with one thought. You realize that you’re never going to get back to your grave to collect your gear.

One second I was working on a pretty sweet freighter base. The next, my lifeless corpse was drifting through space.

Seriously, I made a hearty attempt to gather my gear. I felt like a complete idiot piloting my little explorer ship in circles and bumping into the freighter while trying to figure out a way to collect all my stuff. Couldn’t grab it, couldn’t shoot it, couldn’t get out of my ship. I gave up and loaded my last manual save.

One key thing missing from No Man’s Sky VR right now is Photo Mode. Photo Mode is awesome, and it’s how I captured most of the images in this post—I’ll definitely be using some screenshots for desktop wallpaper. Lack of a Photo Mode in VR actually makes a few missions impossible to complete without switching to pancake (monitor/non-VR) mode and snapping a few shots of the beautiful planetary surface features. You can still use Steam VR’s built-in screenshot feature to capture the majesty of the game along the way, but that don’t seem to count toward missions.

There’s an issue with completing delivery missions in VR. Mission agents ask you to deposit an item at a secure depot. You fly to a depot, perhaps even stop along the way to gather materials to make warp cells to get there, and make the drop. Once you’ve done so, you’re told that you’ve misplaced the item. (You made the deposit, it just didn’t register correctly because of a skipped animation or other issue in the conversion to VR.) The workaround, again, is to complete the mission in pancake mode.

I’ve reported these bugs, and if you come across other bugs they have a form where you can submit them.

A few tips to help you through the universe

No Man’s Sky VR is still buggy in a few aspects, but even through the dropped frame rates and Steam VR crashes, you can see the potential this game has.

Here are a few tips to help make the game perform better and crash less.

Links to other interesting stuff

The game is so screenshot worthy

Everything is just so beautiful. Take a look at some space-selfies. These Steam screenshots  from other users give a glimpse of the wonders you might find on your adventures.

It would seem that hours and hours of endless space exploration might appeal to a certain demographic, so naturally r/nomanshigh  exists. It’s a subreddit devoted to interplanetary stoners.